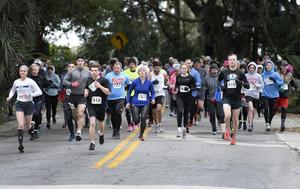 St. Simons and Oglethorpe Point elementary schools are preparing now for the 45th annual Super Dolphin Day Race, an annual fundraiser that brings the school communities and many other supporters together every February.

Super Dolphin Day, set for Feb. 25, includes a One Mile Fun Run, a 5K and a 10K. The races begin at the Casino at Neptune Park on St. Simons.

“This event supports our schools by bringing the community, as a whole, together for the purpose of supporting our students,” said Anna Wiles, principal at Oglethorpe Point Elementary. “The money raised is split between both schools and supports our PTA. The money is used to enhance our instruction and/or building with items such as playground, technology, books, etc.”

Hundreds of participants join the race every year, some of whom travel across the country to do so, Wiles said.

It’s a high-energy, fun day for everyone involved, she said.

“I love seeing the excitement of the students during the One Mile Fun Run as they ‘dash’ to the finish line,” Wiles said. “It is also fun to see students challenge themselves and run in the 5K or 10K as well as the community having fun together.”

The race’s origin was influenced by a fitness craze sweeping the nation in the 1970s, said Katy Ginn, principal at St. Simons Elementary, and the two founders saw the race as a chance to encourage students to be more physically active.

“They christened the race ‘Super Dolphin Day’ for two reasons — because the dolphin is the mascot at SSES and because the new version of Superman starring Christopher Reeves had just been released in theaters and was captivating children across the country,” Ginn said. “They thought that the combination of the Superman (note the dolphin’s cape) and the school mascot would get the students excited about the race.”

The first race included only the 1-mile run, she said, but was so successful that the PTA made it an annual tradition, eventually adding a 5K, a 10K and a pre-race pasta party in the school cafeteria the night before the race. That’s evolved into a Food Truck Expo offered today.

Oglethorpe Point Elementary opened in 1994, and the PTA groups for the two island schools began working together to organize the race and share the proceeds raised.

Today’s races attract more than 1,000 runners an spectators each year, and Super Dolphin Day is one of the largest PTA fundraisers for both schools.

“I would encourage the community to support the event by either being a business sponsor or a participant in the race,” Wiles said. “The event is on a Saturday and is a welcoming, fun atmosphere for everyone. As a business sponsor, we are able to thank them for their support by promoting their business in our race packets.”

PTA funds go toward a variety of projects at both schools. At St. Simons Elementary, these funds support the Ocean Lab, Fall Festival, Dolphins Do Art Day and supplemental curriculum materials.

“The children are always very excited, and it is fun to see both schools come together for such a fun event,” Ginn said. “Everyone cheers the runners on, and the children enjoy running and playing in the Expo.”

Many students participate in the fun run, Ginn said, and the school’s running club trains for the 5K.

“We even have students who run the 10K,” she said. “It is one of my favorite community events, as everyone comes together to support our students and schools. We have runners who come from out of town just to participate in the Super Dolphin Race.”

Organizers are soliciting sponsors and volunteers for the event now. Registration for participants is also open via a registration form or active.com.